This week I focused on setting up a couple of example scripts to demonstrate the functionality of the bootstrap procedure for the analysis of time-series neural data using MNE-Python.

Bootstrap refers to a widespread and acknowledged method for statistical inference. In essence, bootstrapping relies on the idea that using the data at hand can help draw better (i.e., more robust) conclusions about the effects we are trying to estimate.

Compared to more traditional methods, which often rely on (sometimes unjustified) assumptions about the distributional characteristics of the data, bootstrapping provides a method for accounting for biases specific to the nature of the observed data (e.g., skewness, clustering).

The main idea in bootstrapping relies on the drawing of random samples with replacement from the data set. Ideally, when we carry out an experiment, we would like to replicate its results in a series of further experiments and this way derive a certain measure of confidence for the effects observed. With bootstrap we can use the data at hand to simulate what the results of these experiments might be if the experiment was repeated over and over again with random samples.

During this week, my work focused on implementing a bootstrap procedure to derive confidence intervals for an average scalp-recorded brain signal over a certain period of time. In other words, the goal was to plot the average time series of brain activity along with the range of possible average values one could expect if the experiment was repeated a certain number of times (e.g. 2000 times). An example of the results is shown below. 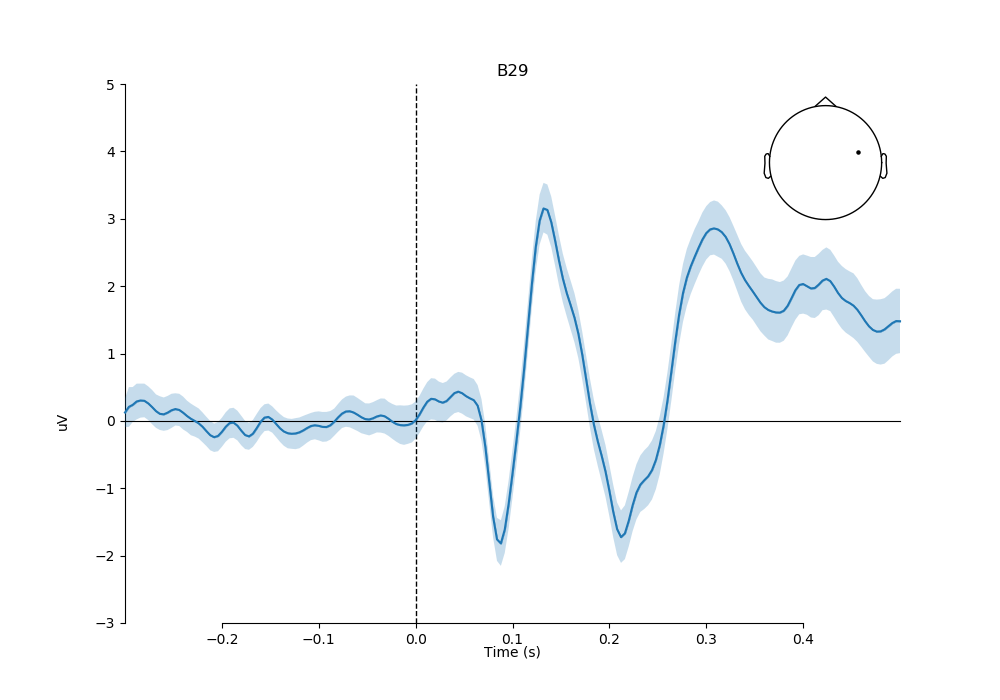 In the image above, time is depicted on the X-axis and the strength of activation on the Y-axis. The average time series is depicted by the solid line. The 95 % confidence interval is depicted by the shaded ribbon surrounding the line. In other words, 95 % of the averages computed from the bootstrap samples where within this area.

After some initial difficulties, which I believe we’re mainly rooted on my initial misinterpretation of the bootstrapping results, I was able to set to make some progress on two example scrips for deriving bootstrap confidence intervals for the average evoked brain response in a particular condition (see here) and for the coefficients of a linear model estimator (see here). I look forward to continuing this work next week.