In the community bonding period I met with my mentor Serge Koudoro, along with other mentors in FURY and gsoc contributors. We discussed about my project and set up project timeline on github projects section. As my project (glTF Integration) and Keyframe animations were related so we discussed on that too.

I read documentation of various glTF loading libraries (pygltflib, panda3D-gltf and pyrender) in python and tried to understand how do they work. I started creating a basic glTF loader, it was using dataclasses to store json data. I created polydata for each primitive in a mesh, each polydata will contain the vertices, triangles, normals. To apply textures properly, I had to apply texture coordinates to polydata and flip the texture along X axis by 90 degrees.

After discussing on pros and cons of various glTF libraries we decided to use pygltflib to handle json to python dataclass conversion. This week I reshaped PR #600 to use pygltflib. I also modified the code to handle multiple base textures. While experimenting with textures, I accidentally applied normals to the polydata and discovered that it makes the surface look much smoother, however in few models it results in a darker model which reflects almost no light. So I made it optional for now to apply normals in a model.

I also created a basic fetcher (PR #602) to get glTF models from Khronos group's glTF sample repository. I also made this function asynchronous, as Serge suggested me to use asyncio and aiohttp to make the API callbacks asynchronous and it decreased the downloading time of multiple models.

I am also working on exporting scene to a glTF file. Using pygltflib I am converting the python dataclass to a json like structure. 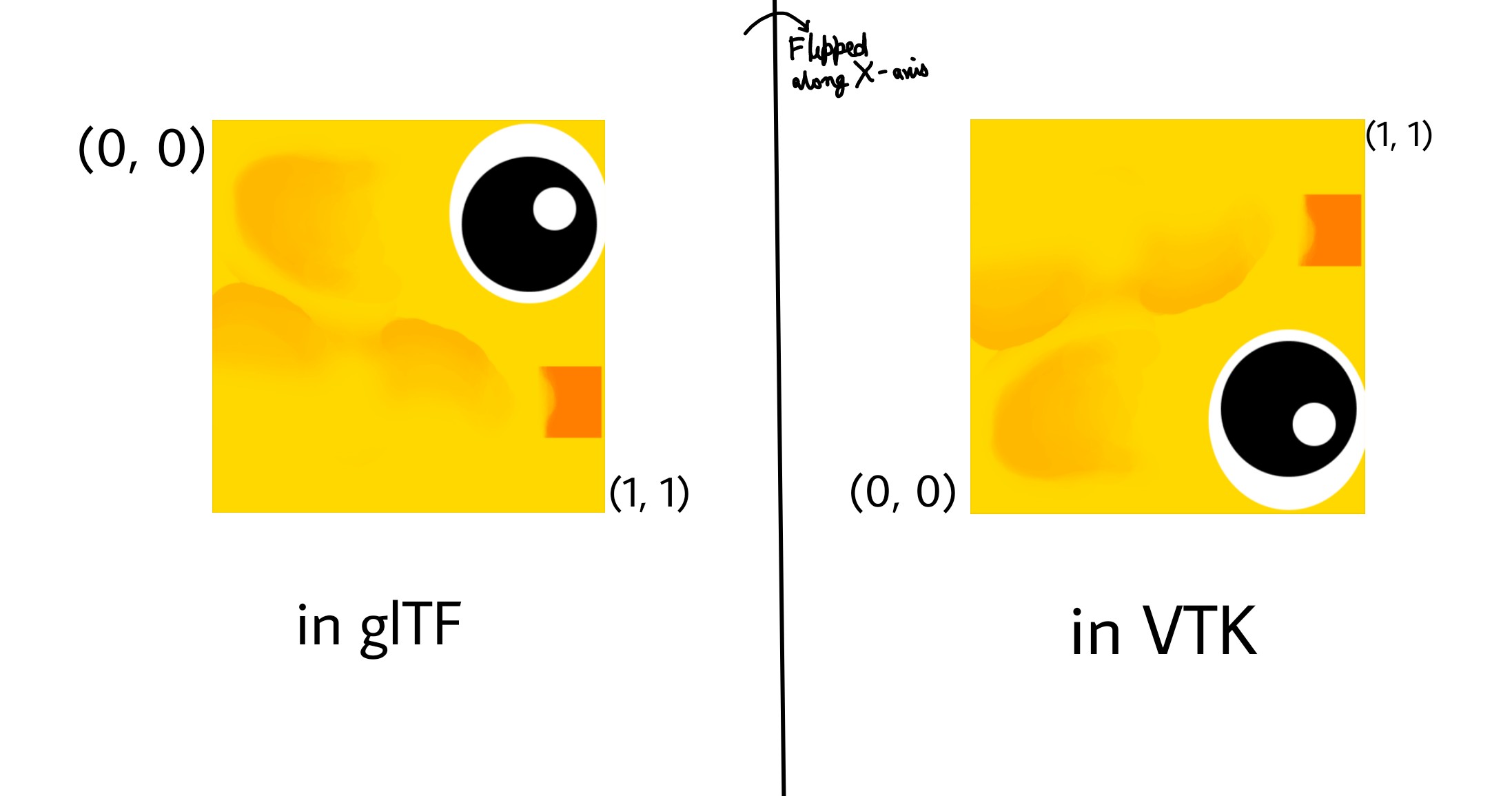 I was introduced to the C programming language through the Introduction to programming course in my first year of college. I always liked computers, and I was overwhelmed by printing "hello world" in the terminal. The course continued to teach us data structures and algorithms. It was a lot of fun competing with friends over a programming question. I learned python on my own and did a lot of projects. After learning basic programming, I participated in many hackathons and won some, but lost a lot. Coding was enjoyable, and I knew this was what I wanted to do for the rest of my life. In my second semester, I learned about open-source, git, and GitHub. I came across some computer graphics enthusiasts in my college; they told me that they created a 2D game engine on their own using OpenGL. This gave me enough motivation to learn OpenGL and basic computer graphics.

Intro to Open-Source and GSoC

In October 2021, I participated in Hactoberfest and completed it successfully. I learned a lot about Free and Open Source Software during this time. I heard about GSoC around this time from one of my seniors and asked him about the program.

I went through the previous year's accepted organizations list and shortlisted 2-3 organizations. I started contributing to a few projects based on android and Kotlin, but I lost interest after some time. It was about December, and I hadn't chosen any organization yet.

I heard about FURY from one of my seniors. I started looking at its docs. Picked up some books from the library to brush up on my concepts of computer graphics. The documentation of FURY is remarkable. I created my first pull request by improving one of the tutorials, and It got merged in a few days.

I started looking at the source code of FURY and tried to understand it again. I read the API reference part of FURY docs this time along with the documentation of VTK. I also tried to solve some of the open issues. I created a few pull requests for the same. My first contribution was in the fury primitive class, I created a sphere primitive (inspired by the sphere in Blender).

I started looking at bugs and improvements that can be made to the source code and created PRs for the same. During this time I was also learning how computer graphics work from the UCSC lectures & OpenGL by Victor Gordon.

After the accepted organizations were announced, I was so happy that FURY got selected this year for GSoC and went straight to the Ideas list. The first project idea was glTF Integration. I heard about the glTF file format before but didn't know how it works. So I went straight through the reference materials provided on the wiki. I read a lot of documentation by the Khronos group. I also tried to implement a basic glTF loader during this time using VTK's built-in glTFReader.

I also liked the Improve UI drawing project idea (I had a basic understanding of line drawing algorithms and rasterizations at that time) and thought I'll make a proposal for that too. After completing my proposal for glTF integration I started my research on this one too.

I started writing the proposal early so that I could get my proposal reviewed at least once with the project mentors. I almost forgot the fact that I had my end-term examinations at hand (Somehow I managed to pass all of my courses), I kept contributing to the project till the end of April 2022.

May 18: I was a bit anxious since on May 18th the GSoC website was showing my proposal for glTF integration had been rejected. (p.s. maybe it was a bug of some sort that they fixed later on).

May 20: I woke up very early in the morning and started checking the contributor's profile. I kept checking for new emails but didn't receive any emails that day. "The result will be announced at 11:30 PM, isn't it? " My dad said, It was 8:00 AM IST. I called my friends in the night to join me on discord, I was talking to them and refreshing the GSoC site at the same time. One of my friends shouted that he got selected in NumFocus. I refreshed the page again, my proposal for glTF Integration was accepted. I can't express what I felt at that moment. I told my friends and my parents, they were happy for me and I got a lot of blessings :). I received an official email the next day.