There are several reasons to have a streaming system for data visualization. Because I’m doing a PhD in a developing country I always need to think of the cheapest way to use the computational resources available. For example, with the GPU’s prices increasing, it’s necessary to share a machine with a GPU with different users in different locations. Therefore, to convince my Brazilian friends to use FURY I need to code thinking inside of the (a) low-budget scenario.

To construct the streaming system for my project I’m thinking about the following properties and behaviors:

To achieve the property 1. we need to circumvent the GIL problem. Using the threading module alone it’s not good enough because we can’t use the python-threading for parallel CPU computation. In addition, to achieve a better organization it’s better to define the server system as an uncoupled module. Therefore, I believe that multiprocessing-lib in python will fit very well for our proposes.

For the streaming system to work smoothly in a low-bandwidth scenario we need to choose the protocol wisely. In the recent years the WebRTC protocol has been used in a myriad of applications like google hangouts and Google Stadia aiming low latency behavior. Therefore, I choose the webrtc as my first protocol to be available in the streaming system proposal.

To achieve the third property, we must be economical in adding requirements and dependencies.


How does it works?

The image bellow it's a simple representation of the streaming system. 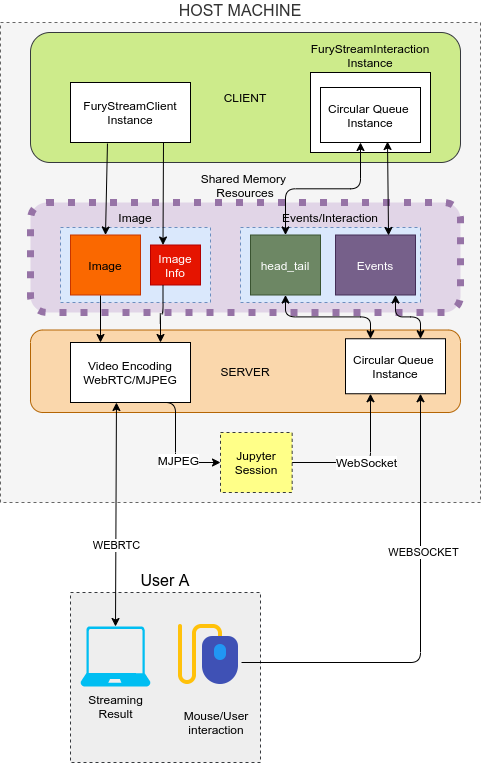 As you can see, the streaming system is made up of different processes that share some memory blocks with each other. One of the hardest part of this PR was to code this sharing between different objects like VTK, numpy and the webserver. I'll discuss next some of technical issues that I had to learn/circunvent.

We want to avoid any kind of unnecessary duplication of data or expensive copy/write actions. We can achieve this economy of computational resources using the multiprocessing module from python.

The RawArray from multiprocessing allows to share resources between different processes. However, there are some tricks to get a better performance when we are dealing with RawArray's. For example, take a look at my PR in a older stage. In this older stage my streaming system was working well. However, one of my mentors (Filipi Nascimento) saw a huge latency for high-resolutions examples. My first thought was that latency was caused by the GPU-CPU copy from the opengl context. However, I discovered that I've been using RawArray's wrong in my entire life!
See for example this line of code fury/stream/client.py#L101 The code bellow shows how I've been updating the raw arrays

This works fine for small and medium sized arrays, but for large ones it takes a large amount of time, more than GPU-CPU copy. The explanation for this bad performance is available here : Demystifying sharedctypes performance. The solution which gives a stupendous performance improvement is quite simple. RawArrays implements the buffer protocol. Therefore, we just need to use the memoryview:

The memview is really good, but there it's a litle issue when we are dealing with uint8 RawArrays. The following code will cause an exception

There is a solution for uint8 rawarrays using just memview and cast methods. However, numpy comes to rescue and offers a simple and a more a generic solution. You just need to convert the rawarray to a np representation in the following way

You can navigate to my repository in this specific commit position and test the streaming examples to see how this little modification improves the performance.

Multiprocessing inside of different Operating Systems 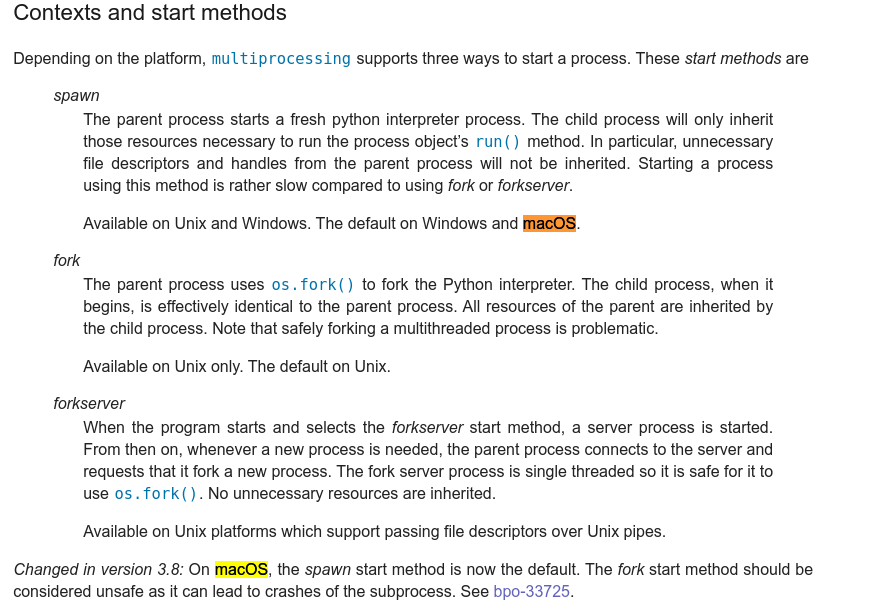 Hi everyone! My name is Bruno Messias currently I'm a Ph.D student at USP/Brazil. In this summer I'll develop new tools and features for FURY-GL Specifically, I'll focus into developing a system for collaborative visualization of large network layouts using FURY and VTK.

What did I do this week?

In my first meeting the mentors explained the rules and the code of conduct inside the FURY organization. We also made some modifications in the timeline and discussed the next steps of my project. I started coding during the community bonding period. The next paragraph shows my contributions in the past weeks

I’ve been stuck into a performance issue (copying the opengl framebuffer to a python rawarray) which caused a lot of lag in the webrtc streamer. Fortunately, I discovered that I’ve been using rawarrays in the wrong way. My commit solved this performance issue.